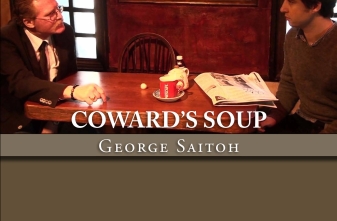 Coward’s Soup is a dramatic distillation of a menacing encounter between two brothers on the passing of their father. The anticipated death also confronts them with the divide between their past and present lives, their ambivalence towards their father and each other, and the vacancy of power that has emerged. In the presence of each other they must face old fears and ideas about justice, and about their own position in the political world of their upbringing that has since changed considerably. Neither can afford to assert their will now without dire consequences for the other, and those consequences can neither be predicted nor controlled.